i think i’m gonna have to stop watching my soaps. i just wish i could stop participating in my own drama.

i decided to give myself somewhat of a day off today and tried to take it easy. i colored with the kids, we made snacks and vegged out and when they wanted to play play-doh for the 3rd time i got them set up and indulged in my recorded episodes from this week. it’s disgusting sometimes. i actually think i threw up in my mouth a little.

you know there’s this guy on there who really jacked up his marriage, and he’s actually fighting for her. he’s all like i’m gonna fix this and i’m gonna prove myself to you. does that happen?. puh-lease. oh, and my other favorite story line is between this crazy girl whose ex has really put her through this vicious cycle over and over again, of course they are the best of friends now….and now she has this all too perfect hunk of a man vowing to be patient with her and take care of her heart, he’s great with her kids, blah blah blah blah… oh and the other couple who were married and he cheated on her and now after that bitch died after giving birth to their child they are once again making their way back to one another, they’ve healed, blah blah blah…and it’s ok now, cause he’s acting like a prince again. no really, he’s an actual prince on the show.

after watching the show … you get something like my last blog. silly me, i had this moronic moment where i felt all high on possibility and the fact that no matter what happens i’m gonna be ok. he’ll be ok. the kids are gonna be ok. we’ll be friends, life will be different than how i imagined, but manageable, blah blah blah blah blah…. and all you have to add to that mix is just a couple hours and BAM! right back to reality.

i may be his friend, but he is no friend of mine. correction, in brief moments of guilt or nostalgia, or when he wants something, like a piece of ass, he can be pretty convincing, but friends…real friends don’t switch things like respect and concern on and off. as much as i wish we continue on as friends, i don’t think we can right now. there was a miscommunication between us tonight that went way too far. i started crying because he wouldn’t listen to what i was trying to say and he, once again, didn’t have the time or the heart to listen, he decided in his head what i meant and what i was trying to do and say and it was all my fault and that was that. that is not a friend.

boundaries is the word for tonight. he has all the power and control to make this as good or as bad as he wants to right now and he changes his mind too damn much. i’m gonna need to set up some really firm boundaries for myself and the kids, and we’ll have to stick with them, so we know what to expect, he knows what to expect and feelings don’t get hurt. and i also need to stop being so damn available and catering to him in the interest of the kids. it’s just as much on him as it is me and so instead of expecting what i give, i need to give what i am given.
i think that will be a good start.

This morning I woke up and made my cup of coffee with Vanilla Hazelnut creamer and sat down with my throw blanket in the recliner to watch a little news, just like I do every morning, but this morning I ended up with tears.

Steve Irwin, The Crocodile Hunter, died today. He was stung by a sting ray while shooting a children’s program off the coast of Australia.

Anybody who REALLY knows me, knows all about how endearing Steve Irwin is to me. Crocodile Hunter is my guilty pleasure. I also do a pretty darn good impression when I’m in a silly mood, or on demand. Only for my children.

I have always been in awe of the way he lived his life with such passion about something, even if it seems odd to the rest of us. He even died doing what he loved.

To his wife and children, my condolences. He will be missed. 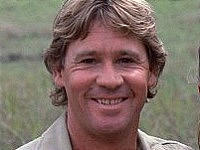 i was watching a recorded episode of general hospital today and one of the characters was describing her ALWAYS volatile relationship with her ex-husband. she was talking about how strong minded, selfish and hurtful he was and how that treatment would push you away. but that he would crumble and that would go away. underneath you’d see this little hurt confused boy who needed your help and you’d long to help him and make it better and that’s why you loved him. she said it wasn’t always bad. that in the moments when he really let her in, it was beyond wonderful, it was magic. but when it was bad, it was all bad. when she was asked why she continued to go back to him, she said it was like an alcoholic thinking they could have one drink…you’d see him hurting and want to help him and the minute you made that decision you were drowning right along with him. that it was all or nothing.

corny as soap operas can be, those were pretty much the words i’ve been looking for.

I couldn’t have said it better myself.

went out with his supervisor last night for drinks after work. he didn’t even call, although he says he tried. (insert severe eyeroll) she gave him a raise…which is good, we need the money. but he smelt like booze really bad again. (sigh) he also informed me that all the department heads are being asked to go out next monday too after work.  that will make what 4x in 3 weeks that he’s gonoe for drinks after work.

i wonder when my break is and if i can have it without owing him before or after it?

I’ve decided to kick things up a notch with my diet.

Right before I make a trip to the grocery store, I write down dinners that I would like to make for the next two weeks on the calendar. I happened to notice that Thanksgiving is only two weeks away. You guys remember Thanksgiving, right? It’s that holiday that the big marketing machine skips over between Halloween and Christmas ((eyeroll)) Anyways, being that I only have two weeks before the impending “holiday season” and all the food and weight gain that comes with it, I’m getting my ass in check, literally.

This morning I started back on a modified version of the first phase of the South Beach Diet which will only last two weeks. I also added exercise to the task list. I did a mile on the treadmill this morning and I bought a new Hip-Hop Cardio Dance DVD that I’m gonna check out this afternoon while Diva takes her nap. I figure this way when two weeks is up, I will have gotten a go head start to the holiday season and I will have gotten rid of my carb cravings which will be a very good thing.

On another note: Did anybody watch that show Trading Spouses: Meet Your New Mommy on FOX last night???

If you missed it, you missed some of the scariest television I have seen in a LooooNG time. The premise of the show is to have Moms go live a different life with another family for a week. My guess is that it’s supposed to be a learning experience but, last night they traded a 400lb “Christian” mother with a huge gap in her front teeth with a new age practicing hypnotist mother. The 400lb mother was PSYCHO. She freaked the fuck out, talking about how the other woman and her family were “dark-sided” and that she “rebuked it in the name of the Lord” and she would randomly say things like, “Find God, he wants you.”  When she got home she started screaming and yelling, telling the crew to get out and screaming about her house being tainted now. This woman’s poor children and husband, their reactions…priceless.

Now, this is what bugs me about, “christians”. Hey lady – remember Jesus? Remember how Jesus is the savior of Christianity? Remember how he told the prostitute to get up and walk with him? I think Jesus was WAY more gracious than the lot of Christians and all their judgements passed. It makes my stomach turn that this woman claimed hersefl a Christian and acted like a deranged psychopath on TV. Inspiration is what changes people if that what she was sincerely after and about all she inspired in me was prayer for her kids and maybe a little nudge on the diet. Hey- isn’t sloth a sin still? Did I miss that?

Interesting fact of the day:

Despite the fact that the average American woman has consistently worn a size 12 to 14 clothing for decades, the women who grace magazine covers have gotten thinner and thinner over the past 20 years.

UCK! I hate going up to that hospital. It just brings back all that anxiety from when Pickle was admitted. Just the smell of it makes my heart drop in my stomach all over again. But Pickle’s appointment went well. Dr. was very happy to see that he was back to being himself. As am I.

I will be thrilled when this adoption is complete and I can file the new birth certificate with the hospital and not have to go through this whole rig-a-ma-ro about consent for treatment and if legally they can accept MY consent.

I’m feeling a little bit apprehensive today and it’s not just about one thing. There’s several things pressing on my mind. But, mostly I’ve had the course that relationships in my life have taken in the last year or so on my mind. I’ve been picking the ones that have gone awry, apart.

I had written a big, long post about it a couple weeks ago, but chucked it cause it just wasn’t coming out right.  Thoughts about being a “best friend” but never having one. And that maybe “best friend” is something we stop titling after middle school because we forget how to be one.  That’s why I love Sex and the City. It’s one of my favorite shows of all times. You know why?

Cause those girls know what it means to be friends. They don’t always approve of what the others are doing but they do know that they’re friends above all else. They have their tiffs and they talk them out or drop them all together and move on because they know what they know about each other, not what they suspect or think. That’s the way friendship should be.

My husband made an interesting observation about that show once…..he said

“You know, this could never happen in real life. In real life…Samantha would hate Charlotte for being so old-fashioned and faithful and Miranda for being so cynical and bitchy but would love Carrie simply because she didn’t judge her and she would talk about the other two to her behind their backs.”

I hate to say this but he’s absolutely right. Maybe that’s why I’ve always had close guy friends which is a lot trickier ot navigate when you’re married and maybe that’s why I sold off my complete Sex and the City Seasons 1, 2 and 3 on Ebay.

Hi. Im Stephanie. I'm a girl daring greatly to conquer life on life's terms with my sense of humor in tact.

Songs STUCK in my head